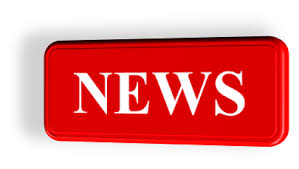 Music helps to build the brains of very premature babies

Researchers from UNIGE and HUG demonstrate how music specially composed for premature infants strengthens the development of their brain networks and could limit the neurodevelopmental delays that often affect these children.

Researchers from UNIGE and HUG demonstrate how music specially composed for premature infants strengthens the development of their brain networks and could limit the neurodevelopmental delays that often affect these children.

In Switzerland, as in most industrialized countries, nearly 1% of children are born “very prematurely”, i.e. before the 32nd week of pregnancy, which represents about 800 children yearly. While advances in neonatal medicine now give them a good chance of survival, these children are however at high risk of developing neuropsychological disorders. To help the brains of these fragile newborns develop as well as possible despite the stressful environment of intensive care, researchers at the University of Geneva (UNIGE) and the University Hospitals of Geneva (HUG), Switzerland, propose an original solution: music written especially for them. And the first results, published in the Proceedings of the National Academy of Sciences (PNAS) in the United States, are surprising: medical imaging reveals that the neural networks of premature infants who have listened to this music, and in particular a network involved in many sensory and cognitive functions, are developing much better.

The Neonatal Intensive Care Unit at the HUG welcomes each year 80 children born far too early – between 24 and 32 weeks of pregnancy, i.e. almost four months ahead of schedule for some of them. The vast majority will survive, but half will later develop neurodevelopmental disorders, including learning difficulties, attentional or emotional disorders. “At birth, these babies’ brains are still immature. Brain development must therefore continue in the intensive care unit, in an incubator, under very different conditions than if they were still in their mother’s womb,” explains Petra Hüppi, professor at the UNIGE Faculty of Medicine and Head of the HUG Development and Growth Division, who directed this work. “Brain immaturity, combined with a disturbing sensory environment, explains why neural networks do not develop normally.”

The Geneva researchers started from a practical idea: since the neural deficits of premature babies are due, at least in part, to unexpected and stressful stimuli as well as to a lack of stimuli adapted to their condition, their environment should be enriched by introducing pleasant and structuring stimuli. As the hearing system is functional early on, music appeared to be a good candidate. But which music? “Luckily, we met the composer Andreas Vollenweider, who had already conducted musical projects with fragile populations and who showed great interest in creating music suitable for premature children,” says Petra Hüppi.

Lara Lordier, PhD in neurosciences and researcher at the HUG and UNIGE, unfolds the musical creation process. “It was important that these musical stimuli were related to the baby’s condition. We wanted to structure the day with pleasant stimuli at appropriate times: a music to accompany their awakening, a music to accompany their falling asleep, and a music to interact during the awakening phases.” To choose instruments suitable for these very young patients, Andreas Vollenweider played many kinds of instruments to the babies, in the presence of a nurse specialized in developmental support care. “The instrument that generated the most reactions was the Indian snake charmers’ flute (the punji),” recalls Lara Lordier. “Very agitated children calmed down almost instantly, their attention was drawn to the music!” The composer thus wrote three sound environments of eight minutes each, with punji, harp and bells pieces.

The study was conducted in a double-blind study, with a group of premature infants who listened to the music, a control group of premature infants, and a control group of full-term newborns to assess whether the brain development of premature infants who had listened to the music would be more similar to that of full-term babies. Scientists used functional MRI at rest on all three groups of children. Without music, premature babies generally had poorer functional connectivity between brain areas than full-term babies, confirming the negative effect of prematurity. “The most affected network is the salience network which detects information and evaluates its relevance at a specific time, and then makes the link with the other brain networks that must act. This network is essential, both for learning and performing cognitive tasks as well as in social relationships or emotional management,” says Lara Lordier.

In intensive care, children are overwhelmed by stimuli unrelated to their condition: doors open and close, alarms are triggered, etc. Unlike a full-term baby who, in utero, adjusts its rhythm to that of its mother, the premature baby in intensive care can hardly develop the link between the meaning of a stimulus in a specific context. On the other hand, the neural networks of children who heard Andreas Vollenweider’s music were significantly improved: the functional connectivity between the salience network and auditory, sensorimotor, frontal, thalamus and precuneus networks,was indeed increased, resulting in brain networks organisation more similar to that of full-term infants.

When children grow up

The first children enrolled in the project are now 6 years old, at which age cognitive problems begin to be detectable. Scientists will now meet again their young patients to conduct a full cognitive and socio-emotional assessment and observe whether the positive outcomes measured in their first weeks of life have been sustained.

This study is financed by the Swiss National Science Foundation as well as, among others, by the Prim’Enfance Foundation. 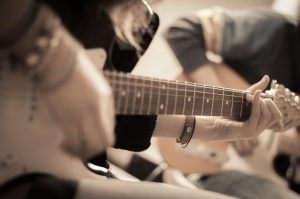 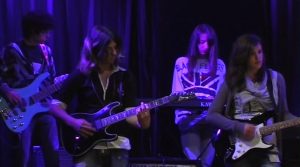